an open letter to Mr. Prasch and Pastor Marco (with enhancements for the reader)

“And as for you, the anointing you received from Him remains in you, and you do not need anyone to teach you.“

” In regard to your use of “midrash” Jacob, You have clearly substituted MIDRASH (the “searching” of men) for “revealing” of the Holy Spirit. This is evidenced by your misconception of the use of “ereunao” (which you assume this to mean Midrash exegesis in the New Testament) in John 5:39 of which Jesus tells the Pharisees their “deep searching” (or Midrash) is useless because they do not know God’s voice. (Ironically you use this as an example of what Midrash is which speaks volumes to your own blindness just as they were blind). In other words, the ” hidden meaning” and the “deep searching” of the intellectual Rabbis’ blinded them from simply knowing God and hearing his voice.

37 “And the Father who sent me has himself testified concerning me. You have never heard his voice nor seen his form, 38 nor does his word dwell in you, for you do not believe the one he sent. 39 You study the Scriptures diligently (Ereunao) because you think that in them you have eternal life. These are the very Scriptures that testify about me, 40 yet you refuse to come to me to have life.” (John 5:37-40) 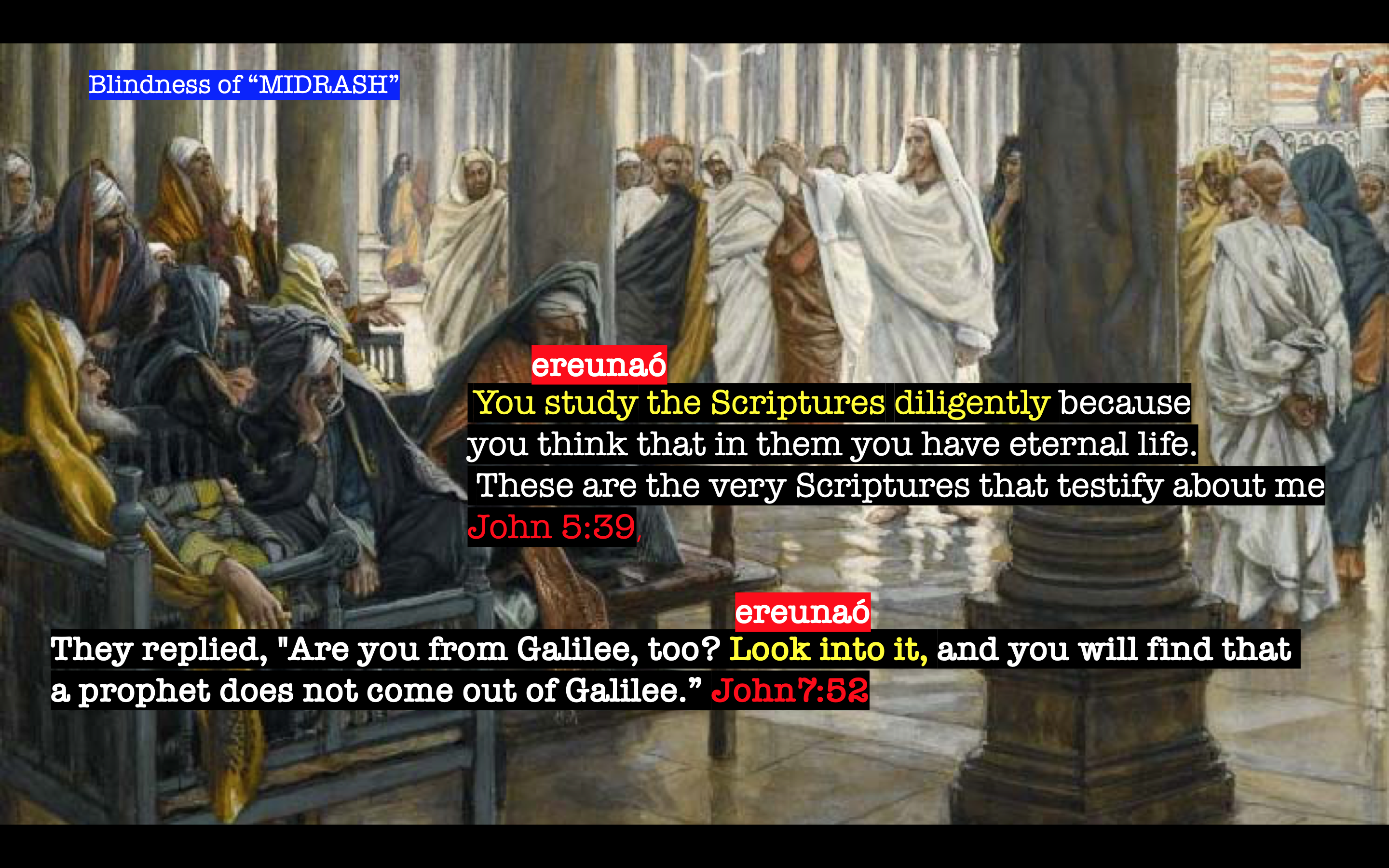 It is used again John 7:52 to once again denote the blindness of the “deep searching” of the Pharisees who could not recognize the Messiah from their “midrash exegesis” of the scriptures, because they were spiritually blind. (They tell Nicodemus to go “Ereunao” the scriptures to realize Yeshua was not the Messiah). It is very clear what Yeshua thought about their “midrash exegesis” and how it blinded them.

50 Nicodemus, who had gone to Jesus earlier and who was one of their own number, asked, 51 “Does our law condemn a man without first hearing him to find out what he has been doing?”52 They replied, “Are you from Galilee, too? Look into it,(Ereunao) and you will find that a prophet does not come out of Galilee.” (John 7:50-51)

The rest of the times Ereunao is used it is in conjunction with the “revealing” and “searching” of the Ruach HaKodesh (the Holy Spirit) who searches, reveals (in his own time) and teaches ALL those who receive him. This was most definitely not dependent upon “Jewish Exegesis” but the sole means of the Holy Spirit who reveals all things in his time and according to his will.

“Just like Hebrew words “Zohar”, “Talmud”, “Cabala” (which obviously do not endorse the later Rabbinic works) are found in the Old Testament, the term “Midrash” likewise found twice in 2 Chronicles 13:22 and 24:27, has no connection or endorsement with the exegesis of the Rabbis except that the development of the exegetical technique was solely formulated to take the place of the Holy Spirit during the 400 years of Silence they suffered.

“Midrash Halakha” (The confused legalism on the levitical Law that made the pharisees add all of their own rules and rituals which Jesus hated and called “traditions of Men”) and Haggadah (their fables and myths they added to the narratives) became ways the Rabbis could attempt to speak on behalf of God in the absence of the Holy Spirit which brought much sectarian debate and confusion because it was not God’s voice but man’s opinion. This Midrash was part of the Jewish traditions that both Jesus and Paul referred to negatively as the “traditions of men”.

As you call the Genesis Rabah a “classic work of Midrash”, (as you see in the picture bellow Jacob’s endorsement) you are endorsing the pseudo words of God, the fables of men that sought to take the place of the Holy Spirit. A forgery of God’s masterpiece well painted (by human standards) by the Rabbis, poetic and enjoyable to read, but none the less it is the imaginations of men not the revelation of God. (Dr. Lawerence Schiffman explains bellow what “Midrash Haggadah” was from the Qumran “Dead Sea scrolls” of which Prasch often refers to. Schiffman calls it “rewritten bible” because the Rabbi’s would interpolate their own myths.

Therefore, even if there are any similarities between the New Testament writers, and the rabbinical exegesis, we must assume that Midrash is NOT “The Key” of biblical understanding as you have stated, it is first and foremost the Holy Spirt who gave understanding and inspired the New Testament writers to give prophetic interpretation and explain the fulfillments of prophecy. It is God’s revealing and the Holy Spirit’s searching that inspired the Bible authors and never once is it the rabbinic exegesis or any endorsement by those chosen authors to use such a system but on the contrary Jesus pointed out their blindness. We must also remember If we do not display evidence of the Holy Spirit in our lives, then searching the scriptures is as a blind exercise that will profit you nothing. We need the “Spirit and the Word” not “Midrash and the Word”.
(part 2 https://peacefulpolemics.home.blog/2019/12/14/midrash-manipulation-pt-2/)